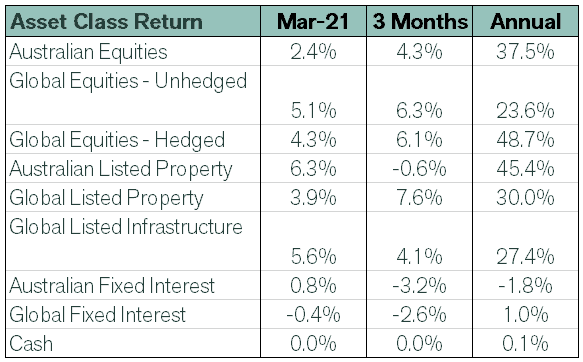 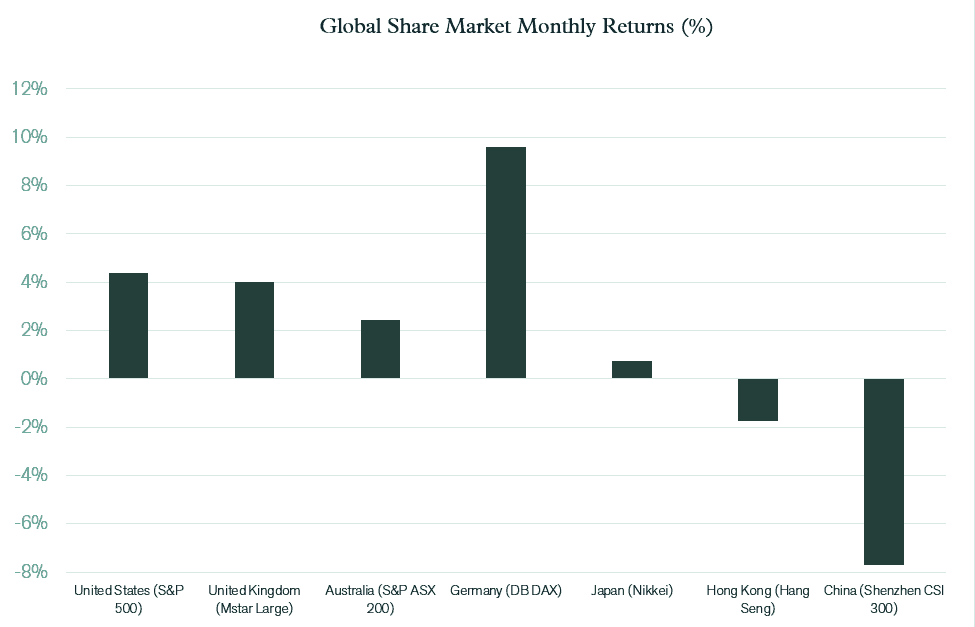 The $US 1.9 trillion fiscal stimulus package was signed into law by President Biden last month. This program is expected to have a materially positive impact on spending and company earnings in the US economy. As such, the program was viewed positively by the US share market, which gained 4.4% over the month. Advances on Continental European markets were even stronger, with Germany positing an increase of nearly 10% for the month. Economic data in Europe has shown significant improvement, with a key leading indicator of manufacturing activity recoding its strongest result on record. The Japanese market posted a more modest 0.7% gain, which consolidated some strong increases over recent months.
Emerging markets lagged developed markets over March, with negative returns in China contributing to this under performance. The fall in Chinese share prices was partially in response to new legislation in the United States requiring tougher audit and disclosure standards for dual listed stocks. 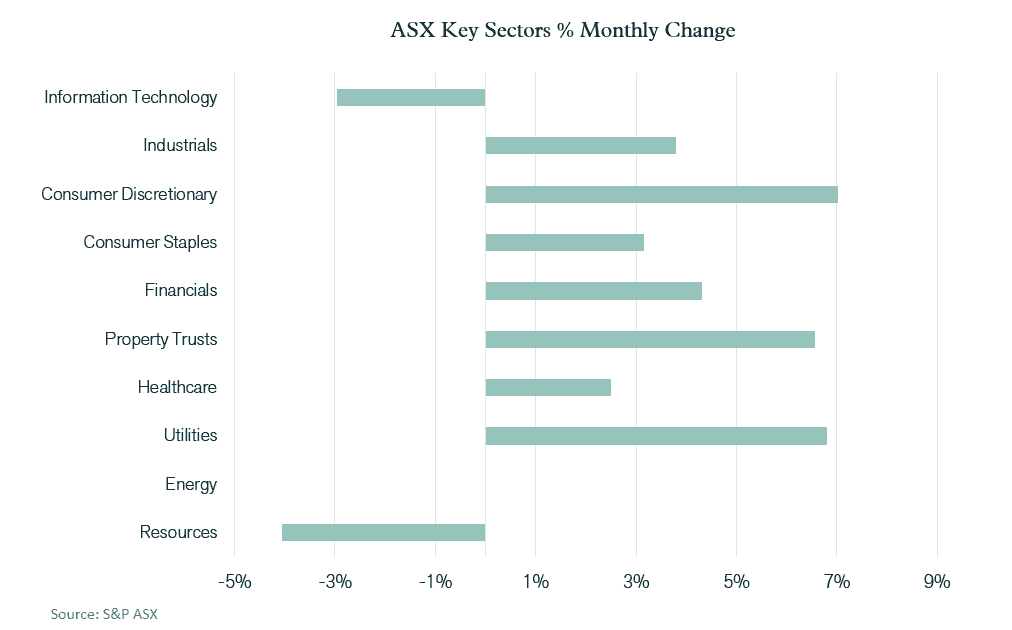 Gains on the Australian market were approximately 2% less than the global average, with the S&P ASX 200 Index rising by 2.4% over March. A pull-back in commodity prices explained some of the underperformance of the Australian market, with oil, iron ore and copper prices all lower following a period of strong increase. As a result, resource stocks finished the month 4.1% lower, with the energy sector flat. Banking and consumer stocks though, again moved higher, with economic data continuing exceed expectations and support the outlook for domestic company earnings. Employment data has been particularly encouraging, with the unemployment rate in February being 5.8% – well below the peak of 7.5% recorded in July. The number of job vacancies is currently higher than the level prevailing prior to the COVID crisis. The improvement in the labour market has provided increased confidence that the end of the Job Keeper program in March won’t result in significant disruption to household spending and the broader economy.

Following a period of extended underperformance, the more defensive equity market sectors rallied over March. Utilities jumped 6.8% with telecommunications 6.2% higher and property trusts up 6.6%. The small decline in Australian bond yields may have been one factor supporting these sectors as the stable yields on offer from property and infrastructure styled assets became more attractive in relative terms. 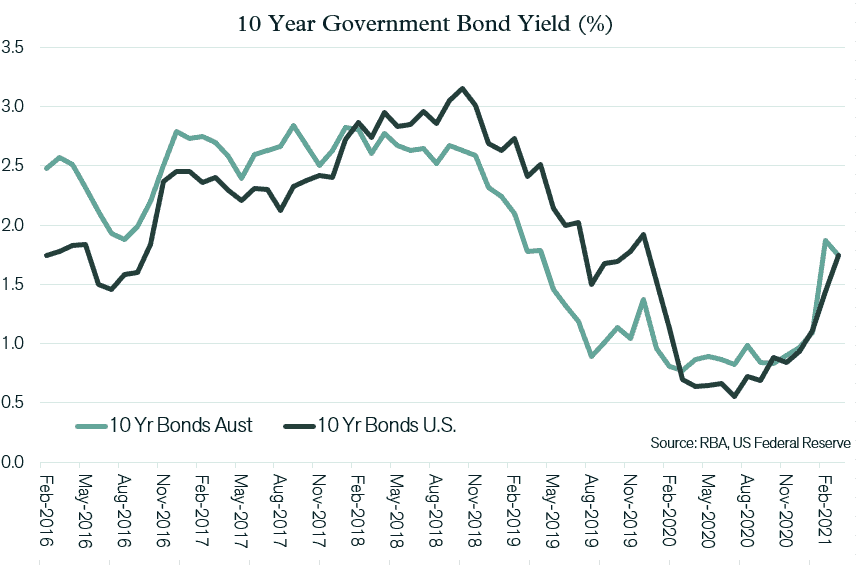 Central banks around the globe continued to re-enforce their commitment to maintaining existing low short term interest rates. Chair of the US Federal Reserve, Jerome Powell, suggested that existing monetary policy support will remain in place until the US economy has fully recovered. However, this statement did not stop longer term interest rates in the US from increasing with the 10-year Treasury yield jumping 0.3% in March to 1.74%. This followed a 0.33% increase in February. Expectations that the US stimulus program will produce both higher economic growth and higher inflation contributed to the rise in longer term interest rates. The higher yields in the US pushed bond prices lower, resulting in negative returns for global fixed interest investors for the second consecutive month. In Australia, however, there was some reversal of the large spike in yields that took place in February, with the local 10-year bond yield dropping 0.13%. This brought the Australian yield back to 1.74% – the same level as that prevailing in the US.

With key commodity prices weakening and local bond yields falling, there was less support for the Australian currency over March. The $A slipped by US 2.3 cents to close the month at US 76.0 cents. Despite the decline last month, the $A remains 23% higher than it was one year ago.

The overwhelming consensus driving financial markets continues to be one in which the vaccine rollout underpins a strong economic recovery, which supports growth in company earnings. Included in this consensus is the view that central banks will maintain existing exceedingly low interest rates, thereby providing the rationale for further valuation expansion on equity markets. Over recent months, most hard data has re-enforced this consensus view and equity markets have continued to advance as a result.

During March however, the market rally was not universal. Support for Chinese equities faltered, and there was a pull back in the price of several commodities. This had some impact on the Australian share market, which underperformed peers, and also is likely to have contributed to a fall in the $A. As the world’s second largest economy, which has become increasingly embroiled in geopolitical issues, any signs of faltering in China’s equity market and broader economic performance deserves close attention. China’s early success at normalising economic activity following the COVID crisis has meant its economic cycle moved ahead of the rest of the globe. Maintaining normalised levels of economic activity post COVID stimulus programs may be more difficult than is assumed in the dominant financial market consensus view.

Given there is some uncertainty over the sustainability of strong economic growth once stimulus measures expire, a weighting in investments towards the more defensive equity sectors such as property infrastructure continues to be adopted in out portfolios. There was some long overdue price appreciation in these sectors in March, however, valuations still remain attractive relative to other parts of the equity market.