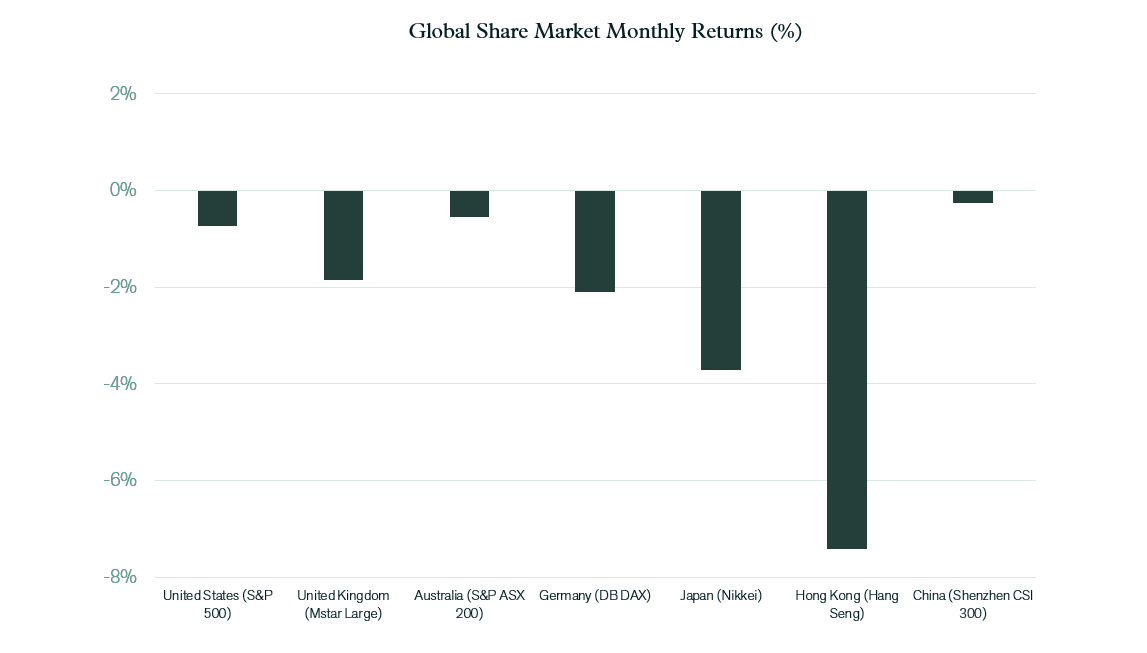 After consolidating the gains from October, global equity markets dropped into negative territory in the final week of last month. Growing evidence of the high rate of transmissibility of the Omicron COVID variant was the major catalyst for the turnaround on markets. The US market fared better than most, with the US S&P 500 Index decline restricted to 0.7%.

Losses were significant in Europe, where non-Omicron related case numbers rose, prompting some reintroduction of restrictions on activity. However, losses on the Hong Kong market were even larger, with the Hang Seng Index falling 7.4%, to now be at its lowest level for 12 months. Ongoing concerns over the earnings outlook and regulatory constraints on Chinese technology, financial and property companies continued to weigh on market sentiment.

It was also a difficult month for emerging markets, where the Omicron variant potentially provides a greater threat due to the lower vaccination rates. Overall, emerging markets declined 3.2% over November. 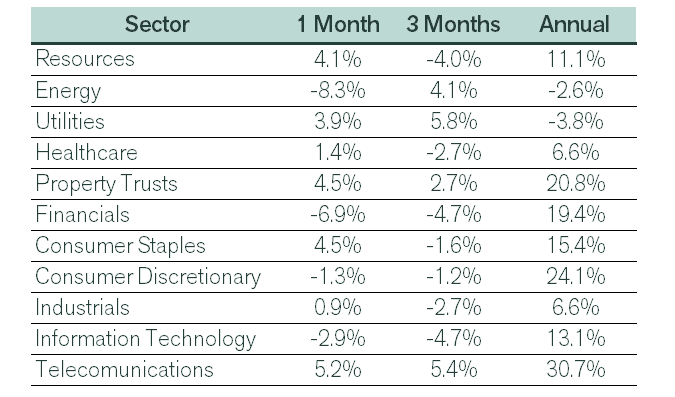 Losses on the Australian share market were slightly less than the global average, with the S&P ASX 200 Index falling 0.5%. A significant 6.9% fall in the finance sector contributed to the decline, with CBA (down 11.0%) and Westpac (down 17.9%) the most notable movements. The market was unimpressed with the Commonwealth Bank’s September quarter trading update, where it detailed that income was down 1% over the three months. Similarly, Westpac’s full-year results (for the period ending September) were announced at the start of November, with the bank’s share price falling steadily after that.

The energy sector also contributed to the overall market decline, as it dropped 8.3% over the month. This reflected a 6.6% drop in global oil prices from recent highs. Several countries (including the US and China) announced that strategic oil reserves would be released onto the market in response to shortages and higher prices for the commodity. Although iron ore prices also continued to weaken, the Australian resource sector bounced back from some recent losses, partially because some of the impacts of weaker commodity prices was neutralised by the sharp drop in the value of the $A.

Some of the more defensive sectors on the Australian market performed relatively well last month, possibly due to a pullback in bond yields. Property Trusts, healthcare, utilities and consumer staples all posted positive returns. 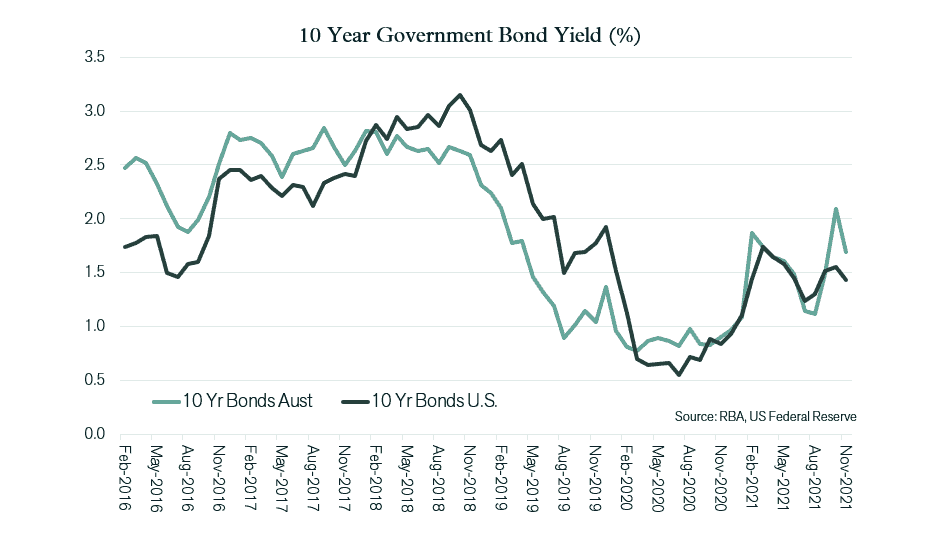 November was another month of high activity on bond markets, with some of the increase in yields recorded in October being reversed in November. The Australian 10-year bond yield dropped from 2.09% to 1.69% over the month but remained well above the 1.12% recorded at the end of August. Yields also fell at the short end of the yield curve. The 2-year Australian government bond declined by 0.16%, but at 0.53%, the yield still implies a material tightening of monetary policy by the Reserve Bank within the next 2 years. 10-year bond yields fell slightly from 1.55% to 1.43% in the US. This fall came despite the Federal Reserve Chairman, Jerome Powell, suggesting that the tapering of bond purchases may have to be brought forward due to higher inflation than expected. 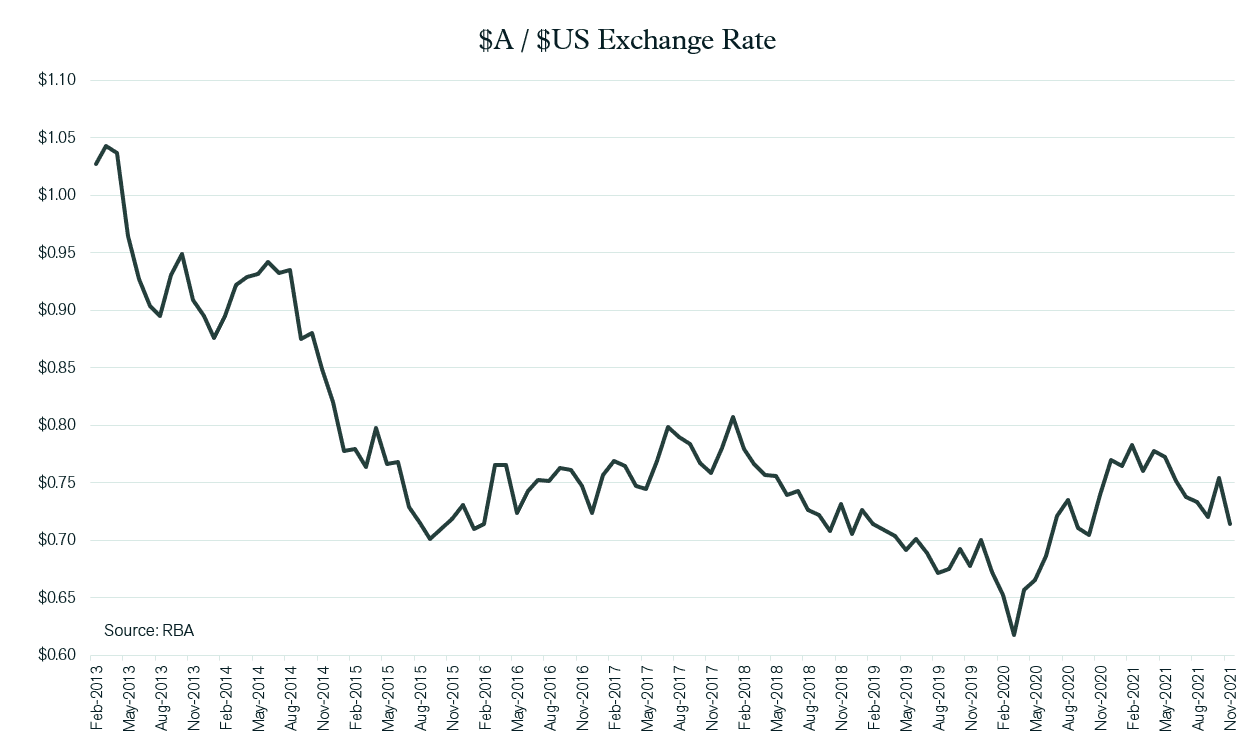 Following a substantial rise in October, the $A dropped sharply in November, moving down from US 75.5 cents to US 71.4 cents. The fall is likely to be in response to weaker commodity prices, a narrowing in the interest rate differential between Australia and the US and the broader concerns over the Omicron variant and its potential impact on economic growth. The weaker Australian dollar did have the effect of softening the impact of falling global equity values, with equity investors who held unhedged currency exposures experiencing an increase in valuations, despite the weaker underlying equity markets.

The news of the emergence of a new COVID variant last month reminded us that the COVID crisis is ongoing and will continue to influence well-being, lifestyles, economies and financial markets for at least many months ahead. In the final week of November, the reaction on financial markets echoed the moves that occurred when the crisis was first realised in the March quarter of 2020. Equity markets declined, the $A dropped, bond yields fell, and the global property & infrastructure sectors experienced a disproportionate fall.

Although the pattern of response was similar, the scale of movement was much smaller than that which occurred in early 2020. The last two years have demonstrated the robustness of corporate business models in particular, and investors were well justified in not panicking in response to the latest evolution of the COVID virus. There remains little evidence that the broader global economic expansion is faltering, with strong labour markets, particularly a sign that further growth in production and spending is likely. As such, the economic backdrop remains supportive of company earnings and equity markets more broadly.

If further progress in the economic recovery remains the central or expected scenario, then perhaps the pullback in bond yields last month was premature. Central banks around the globe have adjusted their positioning and commentary over recent weeks, and bond markets can no longer expect that they will be immune from negative policy surprises. With longer-term bond yields still below longer-term expected inflation rates, either an increase in yields or a downward shift in the inflation outlook is needed to avoid the current imbalance. If this imbalance were to persist through a prolonged period of economic growth, the escalation in asset prices would be untenable in terms of its impact on wealth inequality and housing affordability. Evidence is building that central banks view inflation as being more persistent (rather than “transitory”), implying higher interest rates will follow.

Why it is important to stick to the plan