Talking points for May 2022 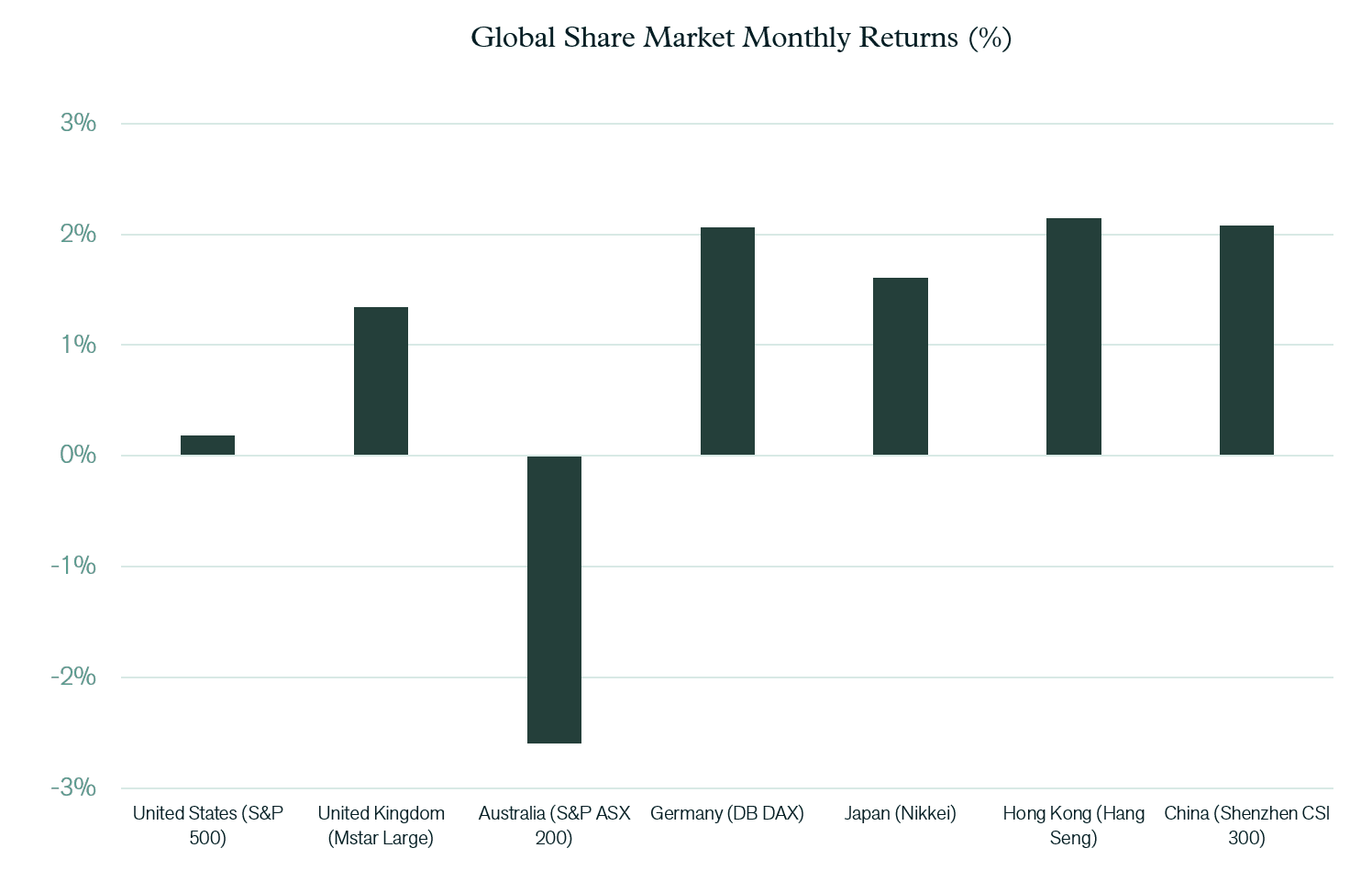 Despite escalating fears that higher interest rates and inflation will trigger a recession, global equity markets recovered late in May to reverse losses recorded earlier in the month. Early signs that perhaps both inflation and bond yields may be near their cyclical peak contributed to the buying support evident on equity markets late in the month.

The US market and the broader global equity asset class finished flat for the month. Europe produced mixed results, with Germany more than 2% stronger, whereas losses were recorded in a number of other countries such as Switzerland and Denmark. Further increases in the oil price (up another 9.5% last month to be 78% higher for the year) once again supported the UK market, which rallied 1.3%.

Following significant underperformance, there was some respite in Chinese equity markets last month. News that Shanghai was to embark upon a tentative reopening program generated support for Chinese shares, which rose by 2.1%. This increase was echoed in the Hong Kong market.

After providing some stability relative to the broader equity market, listed property was sold down over May. A combination of higher interest rates and concerns that a weaker economy would make it more difficult for rents to keep pace with inflation is likely to have contributed to lower support for the sector, which fell by 4.6%. Nonetheless, global listed property has still slightly outperformed the overall global equity asset class on an annual basis. In contrast to the weakness of global listed property markets, infrastructure continued to provide solid returns, with the sector gaining 2.9% over May. For the quarter, infrastructure has now rallied 7.4%, which represents an outperformance of 12.4% over the global equities asset class. In addition, the more defensive profile of infrastructure earnings has led to considerable support for the sector. 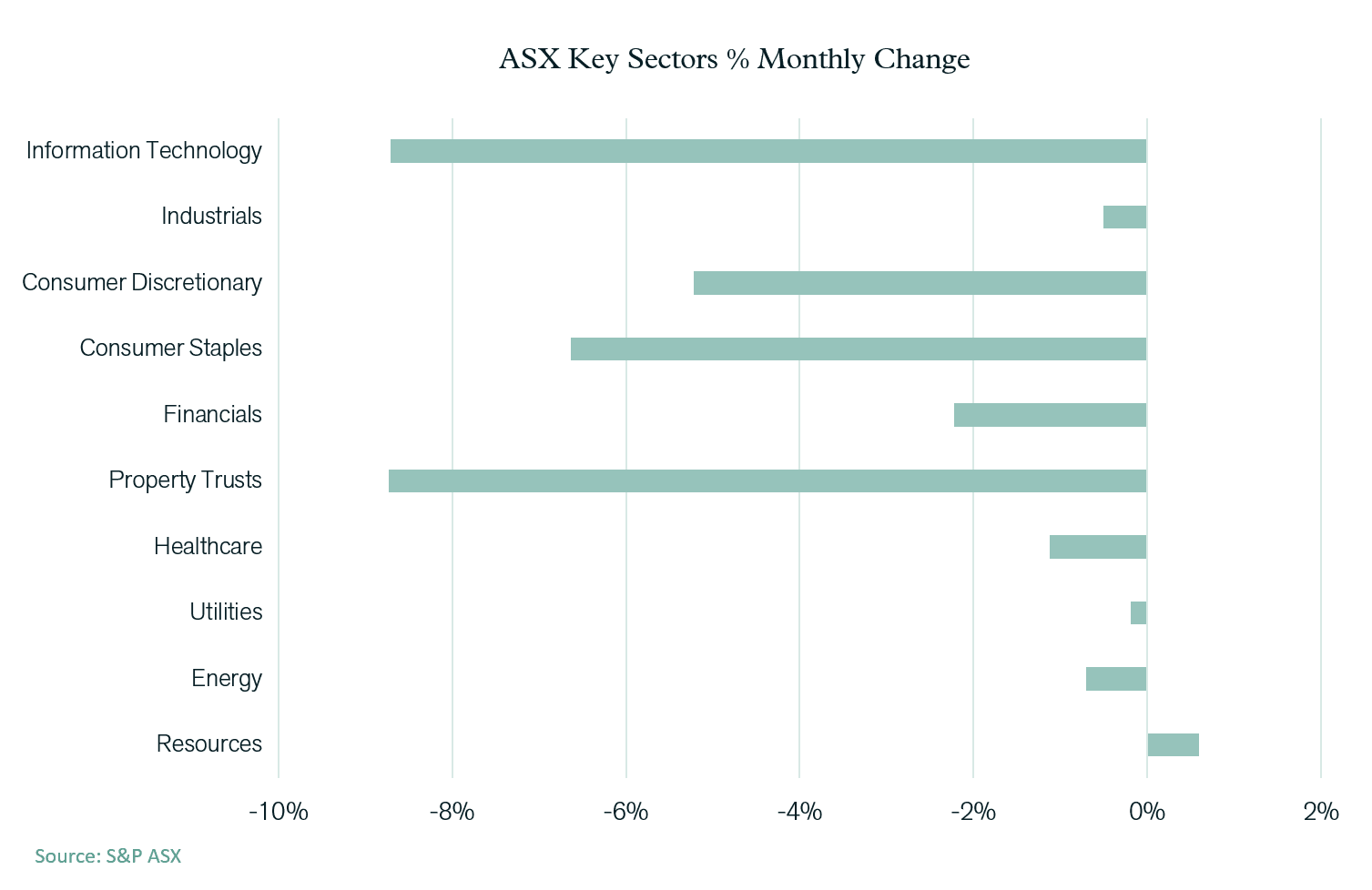 Following a period of relative outperformance, the Australian share market lost ground over May, with the S&P ASX 200 Index falling 2.6%. The decline came despite a positive result from the resources sector, which gained 0.6%. Energy and commodity prices remained elevated, enabling the resources and energy sectors to consolidate recent gains.

Sectors with more cyclical exposure to the local economy fared poorly over May as expectations of softer economic growth and spending weighed on confidence. As was the case globally, these growth-related concerns also impacted Property Trusts, which fell by 8.6%. Although some more defensive sectors, such as healthcare and utilities, held up well, consumer staples dropped 6.6%. This may reflect market concerns that even supermarkets could struggle to pass on the full impact of rising cost pressures to consumers.

As has been the trend for a number of months, the Information Technology (IT) sector experienced a large loss over May, falling by 8.7%. In annual terms, the sector is now 21% lower. Over recent months, the lack of investor support for IT stocks has been matched by the declining popularity of smaller companies on the Australian market. The Small Ordinaries Index dropped 7.0% during May and has underperformed the broader Australian market by 6.8% over the past quarter. 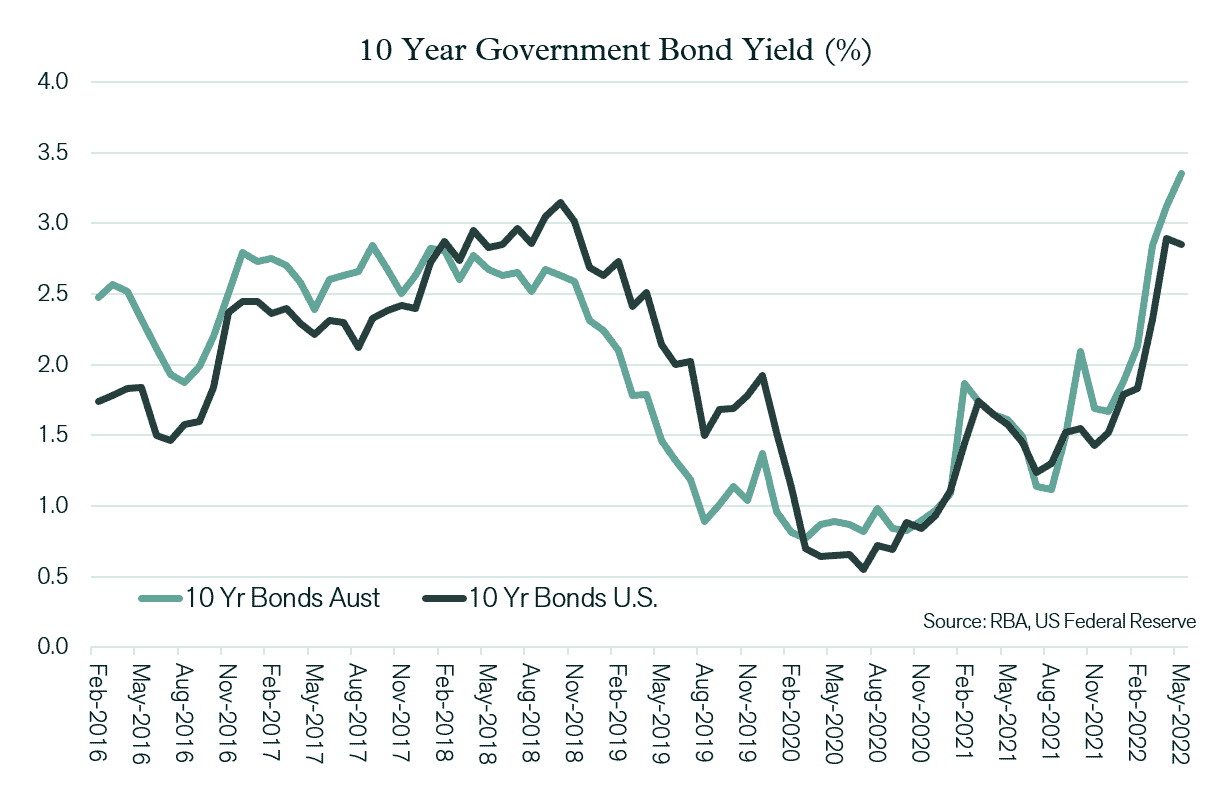 Although central banks have continued to lift cash interest rates (including in Australia, where the cash rate rose from 0.10% to 0.35% in early May), there are some signs that longer-term bond yields may be starting to stabilise.

Last month, US 10-year Treasury Bond yields dropped marginally from 2.89% to 2.85%. Australian yields, however, continued to increase, albeit at a slower pace than in recent months. As a result, the Australian 10-year government bond yield rose from 3.12% to 3.35% over May, with 5-year government bonds now exceeding 3%, closing the month at 3.08%.

The Australian dollar was relatively stable against major currencies last month. Following a depreciation against the $ US in April (due to $ US strength), the $A rose slightly from US 71.5 cents to US 71.9 cents over May.

The mood in equity markets at the end of May was more optimistic, driven mainly by signs that the pace of inflation (in the US in particular) may be starting to flatten. Providing a further reason for optimism was the news that the COVID lockdowns in Shanghai were being eased, which should help alleviate the inflationary pressures brought about by supply shortages and bottlenecks.

Any indication that bond yields may be nearing a cyclical peak should be seen as positive news and provide relief from the unprecedented capital loss from bonds of recent months. From this point forward, higher yields now available give the scope to earn positive returns from interest-bearing assets at a level not seen for some years.

With there now being slightly less concern that inflation and bond yields will continue to spiral upwards, the focus on equity markets has swung more towards company earnings and the extent to which margin pressures and slowing demand will impact profitability. Recent earnings announcements from high profile US based companies, such as Walmart and Netflix, are cause for some concern. These results are perhaps an indication that the dominant trend of recent years of continuous earnings upgrades may be at least more sporadic in the period ahead.

Notwithstanding the inevitable slowing in spending that higher interest rates and higher food & energy prices will cause, the circumstances around the current economic cycle are highly unusual. Of significance is the extremely low unemployment and record high job vacancies that characterise many developed economies at the moment. This labour market strength, combined with a build-up in household savings over the past 2 years, may result in household sector spending being far more resilient than it has been in previous downturns.

As such, the fall in equity valuations that has already occurred over recent months may be sufficient to account for the likely lowering in company earnings and higher interest rates that will persist over the next economic cycle. In addition, equity markets have shown a tendency to “look through” periods of short-term earnings weakness in recent times and may react positively to any evidence that the near-term economic downturn will be shorter and shallower than is typically the case in recessionary periods.

Why it is important to stick to the plan