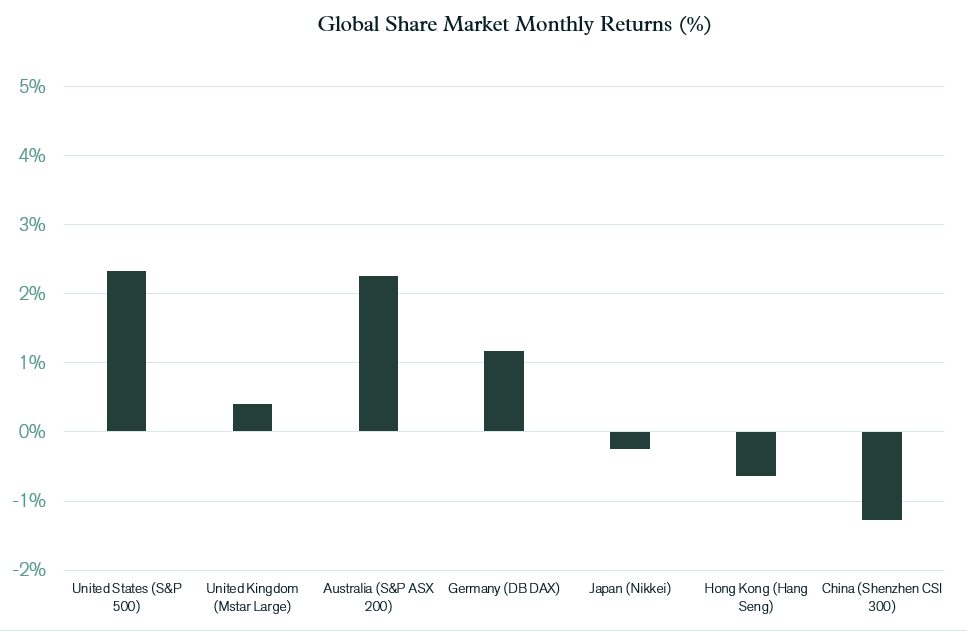 Boosted by confirmation of the U.S. Government’s $579 billion new infrastructure spending plan, the U.S. market led global equities higher last month, with a gain of 2.3%. Also contributing to this growth was a strong bounce back from the I.T. sector. The valuation effects of lower longer term bond yields saw a strong return of support for “growth” styled equities, many of which reside in the U.S. Information Technology sector. Gains elsewhere were more muted, although European markets consolidated on recent strong performances as their economies continued to normalise after the extended lockdown.

Asia posted the weakest results of the major regions over June, with China, Hong Kong and Japan all recording negative returns. Japan’s economic data continues to fall short of expectations, with factory output in May dropping 5.9% as the country has been forced to reintroduce various COVID-19 related restrictions. In contrast, China’s economic data remains relatively solid, although having recovered from the COVID lockdowns earlier, the economy is no longer enjoying the same level of policy support as most developed economies currently are.

Australia matched the increase of the U.S. last month, with the  S&P ASX 200 Index rising 2.3%. Information Technology was the strongest performing sector, gaining 13.4% following the previous month’s 9.9 decline. “Buy Now Pay Later” leader, Afterpay, made a significant contribution to the sector’s gain last month, rising by 27%. Energy stocks attracted some support following a prolonged period of underperformance, with the sector advancing 4.0%. An 11.2% jump in the WTI oil price no doubt encouraged investors. However, gains elsewhere across the resource sector were less impressive with both BHP (up 1.5%) and Rio Tinto (up 2.4%) failing to keep pace with the 11% gain in the global iron ore price last month.

Following a strong increase in May, the financial sector was flat over June. This was despite some evidence that record high housing loan approvals were having an impact on the overall balance of housing loans outstanding, which have now grown by nearly 5% in annual terms. Signalling renewed investor confidence in the reopening and underlying strength of the economy was a gain of  5.5% in property trusts. Both industrial and office property attracted support, as indicated by respective gains in Goodman and Dexus of 9.7% and 4.5%.

In a possible sign that investors are now looking more favourably on stocks that are trading at cheaper valuations, both the utilities (up 3.5%) and consumer staples (up 5.3%) sectors outperformed the broader market average last month. These two sectors have been significant underperformers over the past year. 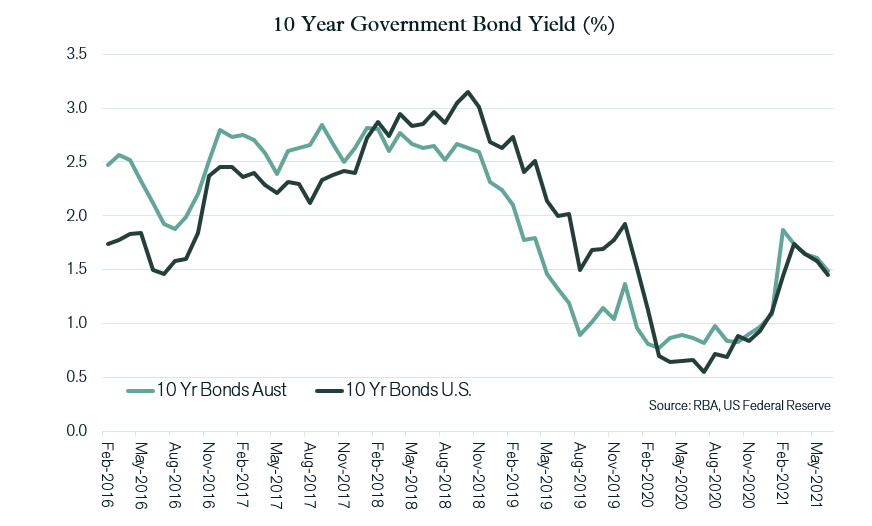 Despite the ongoing evidence of economic recovery, and further data demonstrating significant reductions in unemployment, Australian longer term bond yields continued to decline from their February peak. During June, the Australian 10-year bond yield dropped by 0.12% to 1.49%. The equivalent yield in the U.S.  remained close to the Australian yield at 1.45%. The loss of the upward momentum in bond yields over the past quarter is likely to reflect a consensus view that inflationary pressures being experienced currently will prove to be “transitory” and not result in a material structural shift away from the low inflationary environment. This is despite a spike in U.S. inflation of 5% in the year to May. There were, however, some indications from members of the US Federal Reserve Bank that interest rate expectations have lifted and there was also some dispersion in views amongst members as to when US monetary policy should be “tapered”. However, whilst the revelation of these views did see some short term bond yields rise last month, there was no increase at the longer end of the yield curve.

Suggestions from members of the US central bank of an earlier than forecast lift in interest rates is in contrast to the Australian Reserve Bank, which has maintained a consistent view that cash rates would not be shifted until 2024. The possibility that any rate increases in Australia would lag those of other developed economies put downward pressure on the $A last month. This $A depreciation came despite further commodity price rises and exceptionally strong Australian trade accounts. Against the $US, the $A dropped from US 77.3 to US 75.2 cents over the 3 month period and was also 0.2% weaker against the Euro at €0.632.

With global equity markets now more than 20% above their pre COVID-19 crisis peaks, valuations are clearly in the upper ranges of fair value. Expectations for future capital growth should therefore be more modest and more closely tied to further improvements in the outlook for earnings growth. Global economic data remains supportive of company earnings, with the decline in unemployment perhaps the most significant factor in fundamentally lifting the productive capacity of economies around the globe.  As such, there remains a reasonable prospect that share markets can continue to track earnings higher over the period ahead, particularly if monetary policy remains supportive. However, it should be acknowledged that as stimulatory fiscal policies are wound back, the scope for ongoing earnings growth may be somewhat more limited.

The possibility that inflation will persist longer and larger than expected remains the largest concern of both equity and bond investors at the moment. Persistence of inflation beyond the transitory spike now being experienced around the globe could see an earlier rise in interest rates than the consensus scenario assumes. Higher interest rates would make existing equity valuations more difficult to justify and could also cut short the favourable economic cycle now prevailing. Increased market volatility in response to new data either supporting or refuting persistent inflation can be expected from here.

Whilst the maintenance of benchmark exposures to growth assets remains the path most likely to achieve real investment return objectives, increasingly investors should be considering biasing portfolios away from assets that have the most excessive valuations and are the most susceptible to an inflationary scenario should it ultimately prevail. Within equities, there are clear valuation discrepancies between sectors and styles and not all future scenarios will be supportive of the current valuation mix.

Hence, although the macro influence of improved economic activity may well continue to support equity and property markets in the months ahead, there are a number of factors at play that could alter the pattern of returns across and within assets classes. Assets that have done exceptionally well in recent times, and are now expensive as a result, cannot be expected to outperform indefinitely. An active approach to portfolio management that seeks out assets with both defensive earnings and long term growth characteristics may be more important than ever in the months ahead.

5 Financial habits that will pay dividends in 2021 and beyond