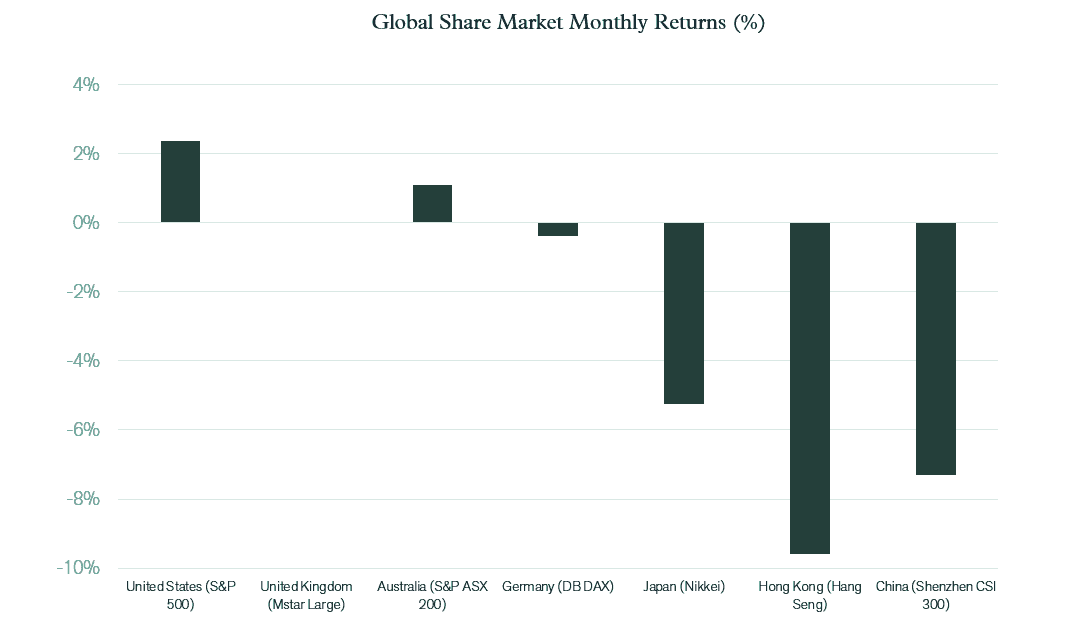 A better-than-expected earnings reporting season in the United States provided a renewed source of confidence for investors who pushed the US S&P 500 Index further into record territory with a 2.4% gain.

Other major markets were more subdued. Although the UK and Germany had flat results, other European markets were mainly positive. There is now considerable focus on the UK as it provides a potential blueprint for the full reopening of economies with high COVID vaccination rates.

Although there has been a lift in COVID infections across developed economies over recent weeks, this doesn’t appear to have had a major impact on share markets. Japan is the exception where a marked rise in case numbers coincided with a sharp decrease in the Nikkei Index of 5.2% last month.

Renewed government regulatory action significantly impacted returns in China (down 7.3%) and Hong Kong (down 9.6%). Chinese authorities announced significant reforms to the education sector, effectively banning profit making enterprises from school curriculum related education. The changes are believed to address concerns over the heavy use of these services in China, creating inequality and higher costs for families raising children. These costs are viewed as one of the reasons China has been unable to significantly increase its birth rate despite authorities abandoning the ‘one child’ policy due to concerns over the ageing of the population. The education reforms follow increased regulatory activity impacting listed businesses in China, particularly in the Information Technology sector. 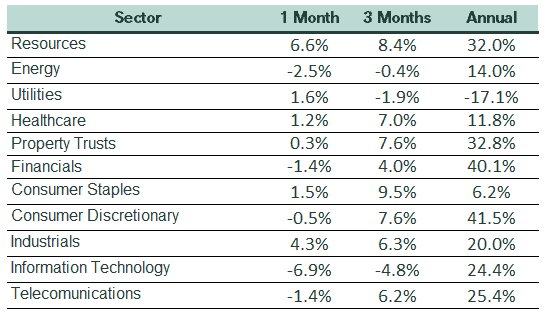 Gains on the Australian market were marginally behind the global average, with the S&P ASX 200 Index advancing 1.1%. The resource sector (up 6.6%) was a material contributor to this rise, with investors encouraged by the likelihood that end of year earnings results would confirm that continued high commodity prices lifted both the size of profits and dividends from the sector. While the majority of commodity prices continued to rise over July, there was a pullback in the price of iron ore (down 9.9% in $ US terms) due to expectations of reduced volume demanded from China.

The more domestically focussed cyclical stocks were impacted by COVID related lockdowns, with the consumer discretionary sector falling 0.5% and financials slipping 1.4%. Conversely, defensive sectors performed better, with both healthcare and consumer staples rising. It was also a positive month for utilities, with some merger and acquisition activity suggesting that lagging listed valuations were becoming attractive to private and institutional buyers.

Following a large jump of 13.4% in June, the Information Technology sector continued to exhibit high volatility, with the sector falling 6.9% in July. In annual terms, the rise of the Technology sector of 24% is now below the overall market increase of 29%. 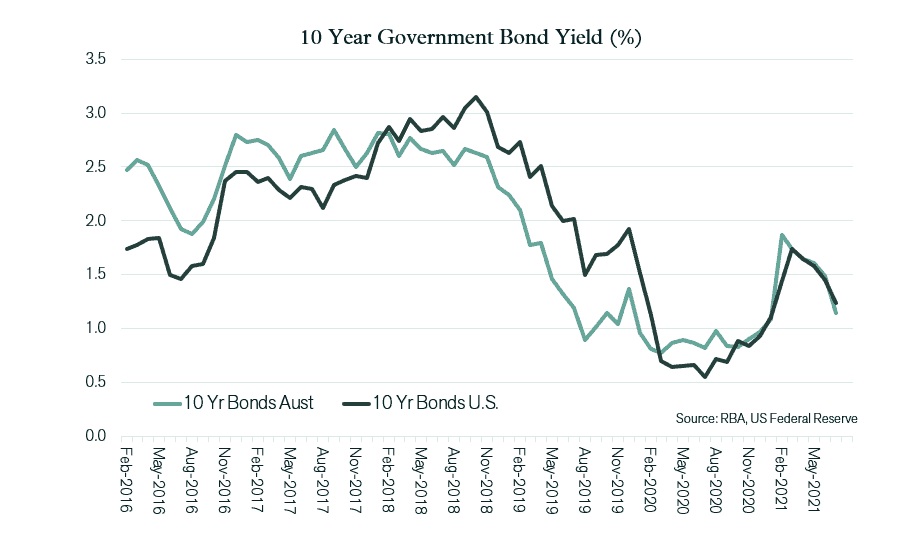 Although not changing its cash rate target, the Australian Reserve Bank did announce a slight adjustment to its monetary policy settings last month. The change is related to the size of the bond purchase program that is associated with the central bank’s quantitative easing initiative. Previously, the RBA had been purchasing approximately $5 billion in government bonds per week in the 5-year to 10-year maturity range, intending to manage interest rates lower across the yield curve. This purchase program is now expected to be reduced to $4 billion per week. The change reflects an acknowledgement that the economic recovery has been faster than expected.

However, despite this change and the confirmation that annual inflation had jumped from 1.1% to 3.8% in the June quarter, longer term bond yields continued to drift lower, with the 10-year yield falling from 1.49% to 1.14%.

Similarly, in the US, where annual inflation has now surpassed 5%, the 10-year Treasury yield fell from 1.45% to 1.24%. The bond market’s assessment is clearly that inflationary spikes are temporary and that monetary policy will remain loose for an extended period. The downward movement in yields over recent weeks may also indicate bond markets having more concern about the impact of the ongoing COVID crisis than is apparent in equity markets.

The downward trend in the Australian currency also continued last month. Weaker iron ore prices and the fact that Australian bond yields fell by more than US equivalents contributed to a 1.8% drop in the $A to $US 73.8 cents. There was a similar decline in the $A against the Euro. The weaker currency was positive for investors holding global assets on an unhedged basis, with the $A value of foreign currency domiciled investments appreciating as a result.

In some respects, the direction of market movements prevailing over July mirrored the dominant trend of recent months. Falling bonds yields associated with positive economic and earnings data made equities even more attractive than they were in the prior month. However, beneath the surface there are signs of a change in the pattern of equity market growth.

Firstly, the appetite for more defensively positioned equities less reliant on cyclical earnings growth appears to be mounting. The cause of this could reflect the view that the upswing in the earnings cycle is starting to plateau. However, it may also be associated with the persistence of COVID infection rates and the possibility that COVID related restrictions will be a constraint on economic growth for some time to come. Locally, takeover bids for Sydney Airports and Spark Infrastructure demonstrate that listed valuations for defensive and infrastructure styled assets are attractive, having not being bid up over the past year to anywhere near the same extent as more cyclical and “growth” styled equities. The combination of earnings being boosted by materially positive inflation with the maintenance of interest rates being held artificially low, creates a unique situation for property & infrastructure styled assets in particular. The “real” or physical nature of the asset allows for ownership in geared structures that can exploit the differential between interest rates and the inflation linked cash flow growth these assets are likely to produce.

Secondly, the equity market rally is appearing to become narrower in scope. In July, for example, 5 of the 11 industrial sectors on the Australian market posted negative results. Geographically, Japan, China and some European markets also declined over the month. This is despite a material fall in longer term bond yields, that all else being equal, should have supported a general lifting of equity market valuations.

Based on this, a more cautious approach to equity market exposures may be warranted, with an increased focus on defensively positioned assets able to maintain some earnings growth despite a possible deceleration in the broader economic cycle linked growth rate.

What are the 8 dimensions of wellbeing?

Inflation: Structural or not? from Lonsec CIO