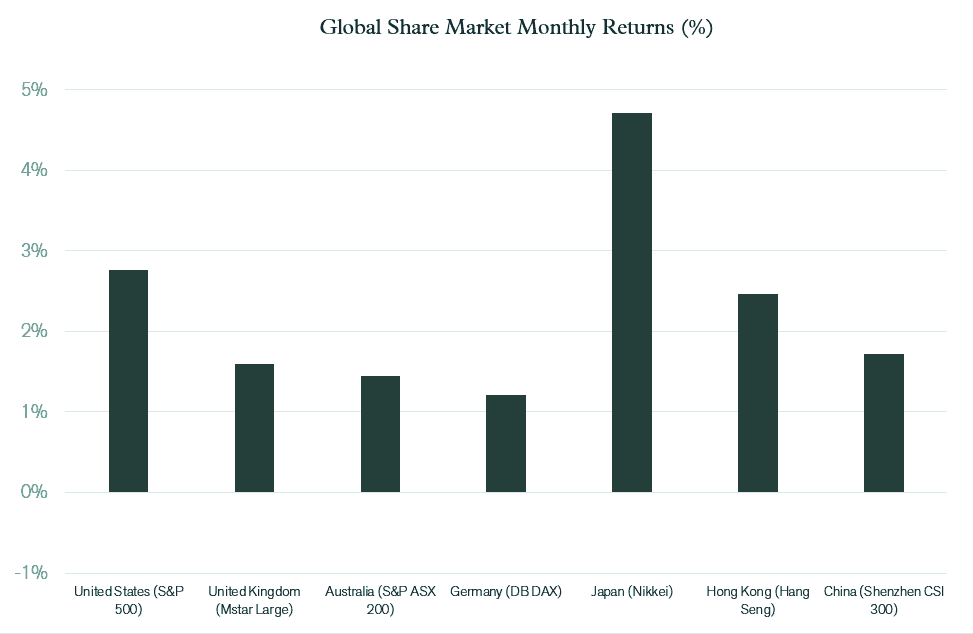 A material slowdown in new COVID cases and progress on the vaccine rollout, particularly in the U.K. and the United States, boosted investor sentiment in early February. Also contributing to share price growth was an encouraging earnings reporting season, as well as the $US 1.9 trillion fiscal stimulus package in the U.S. gaining approval through various committees. The resulting gains on share markets were significant early in the month and sufficient to more than offset the negative impact from rising bond yields later in the month. Japan, where the effect of higher bond yields was less significant, was the strongest performer amongst the major markets, with the Nikkei Index gaining 4.7%. The Japanese market has now increased 25% over the past 6 months, placing it well ahead of other major developed markets.

Emerging markets were generally weaker than developed markets over February, despite strong gains in commodity and energy prices. Brazil, which remains heavily impacted by the COVID second wave, produced negative results, whilst China’s gains were not as strong as in previous months. 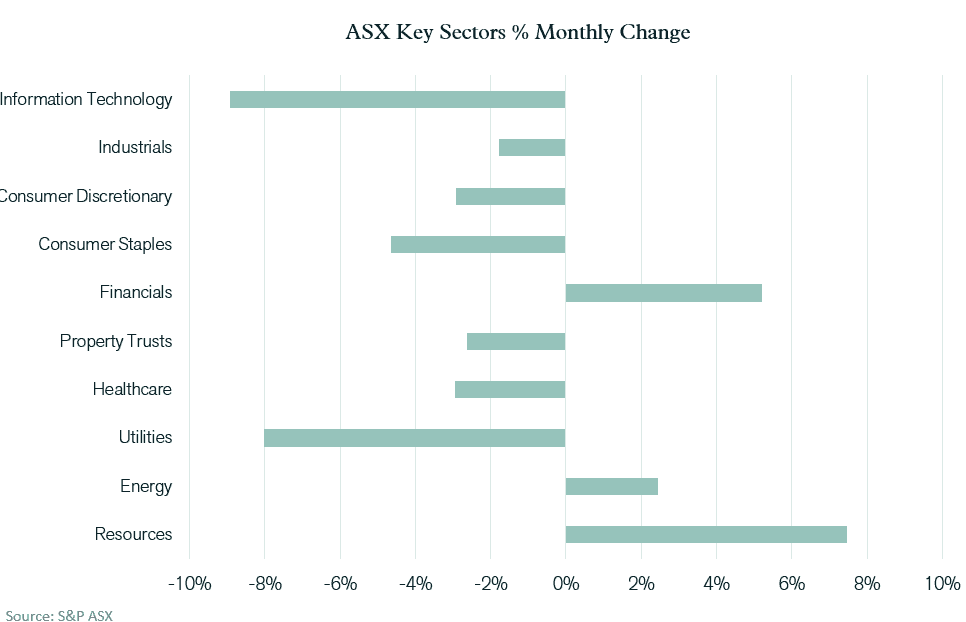 Gains on the Australian market were slightly less than the global average, with the S&P ASX 200 Index rising by 1.5%. The profit reporting season for the period ending December 2020 showed significant recovery in company earnings, with results generally more favourable than market expectations. Higher resource and energy prices reinforced the outlook for earnings growth in resources sector. Over the month, iron ore prices advanced another 2%, whilst the price rises for base metals were more significant. This reflected the more positive outlook for global economic growth and inflation, which also impacted on the oil price, which gained 17% over the month. As a result, resources (up 7.5%) and energy (up 2.4%) were positive contributors to the Australian market last month. Also leading the market higher was the financial sector (up 5.2%), where banks were well supported due to improved earnings and expectations that stronger lending and higher nominal bond yields would be supportive of future interest margin growth. Ongoing strength in the residential property market was also supportive of the banking sector, paving the way for the banks to reverse some of the loan loss provisions that impacted on earnings and dividends when the COVID crisis first took hold.

However, not all sectors delivered positive results as higher bond yields became a catalyst for rotation away from companies with high earnings growth expectations (where the higher interest rates have a greater impact on share price valuation metrics). This was particularly noticeable in the Information Technology sector, where prices dropped by an average of 8.9%. Other sectors shown to be interest-rate sensitive were Property Trusts (down 2.6%) and Utilities (down 8.0%) as the steady yields expected from these sectors became less attractive to investors relative to the higher bond yields available. 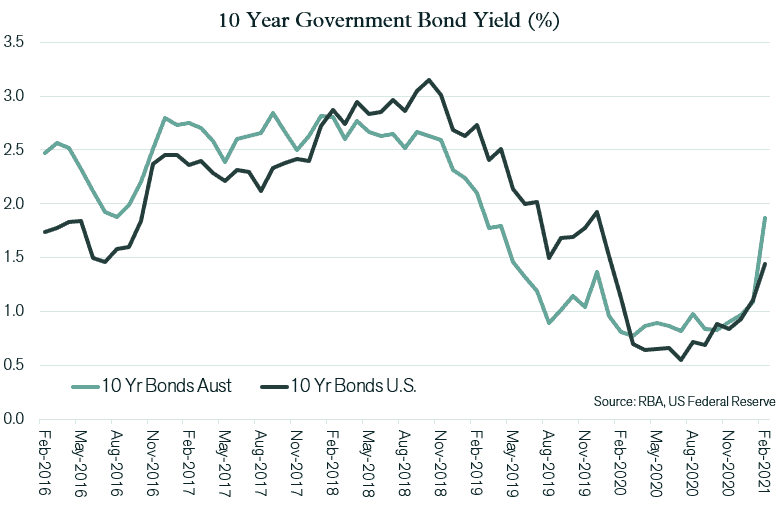 As was the case in January, expectations of improved economic growth and inflation drove longer-term bond yields higher. The increase in yields was particularly significant in Australia, where the 10-year government bond yield jumped from 1.09% to 1.87%. In the U.S., the yield increase was more moderate with the 10-year Treasury yield moving 0.33% higher to 1.44%. The rise in yields resulted in negative returns from many fixed interest investments (as bond prices fell). However, investments linked to variable (rather than long term) interest rates largely avoided these losses. With central banks maintaining a commitment to keep cash interest rates at record low levels until unemployment normalises, the rise in longer-term yields has created the steepest yield curve experienced for some time.

As indicated on the chart above, Australian longer-term yields are now back above U.S. yields. This yield differential is supportive of the Australian dollar. In addition, the Australian currency was boosted by stronger commodity prices again in February. Against the $US, the $A rose from US 76.5 cents to US 78.3 cents. As a result, global investments hedged back into Australian dollars performed better than unhedged investments, which has been the prevailing trend for the majority of the past year.

The rise in longer-term interest rates over February was a logical and expected result of the significant improvement in the economic outlook that has emerged across the globe in recent months. With short term interest rates being maintained at record low levels and further substantial stimulus to come, particularly in the United States, the stage is set for further inflationary pressures emerging and the potential temporary overheating of economies. The magnitude of the impact of this stimulus coinciding with the expected success of the vaccine rollout should not be underestimated. As such, it remains too early to move fixed interest portfolios back towards longer-term bonds, despite the higher returns now on offer.

High levels of consumer confidence backed up by stimulus-induced purchasing power continues to produce an environment highly supportive of company earnings and equity markets. With the global economy in a cyclical upswing, the rotation away from the more expensive growth-orientated stocks, towards “value” stocks positioned to benefit from a broader economic recovery, may have some way to run. Active managers who can navigate this transition may be well placed to outperform passive investments in this environment.

However, whilst the immediate environment appears supportive of equity markets, increasingly investors should be focussed on the “post-recovery” environment. The steeper the upswing in spending in the months ahead, the greater potential there is for a sharper decline once the cycle matures, and the stimulus is unwound. To assist in the management of this post-stimulus downturn, investors should take opportunities to purchase more defensive sectors, such as listed property and infrastructure, which are currently trading at attractive valuations relative to the broader equity market. Whilst being less exposed to economic cycles, these sectors would still benefit from an upswing in inflation as revenues and asset values increase. As such, property and infrastructure can play an important role in protecting the purchasing power of an investment portfolio as well as stabilising returns across a full economic cycle.

5 Financial habits that will pay dividends in 2021 and beyond

January 2021 Markets Review – A pause in the global sharemarket rally