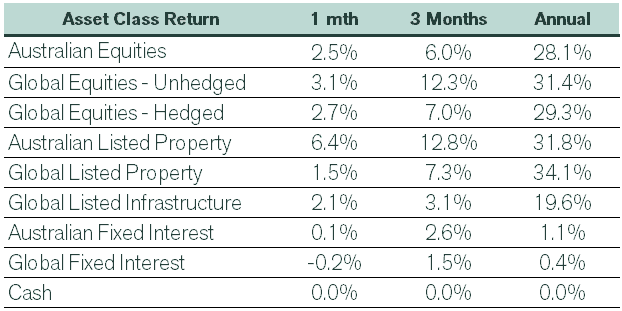 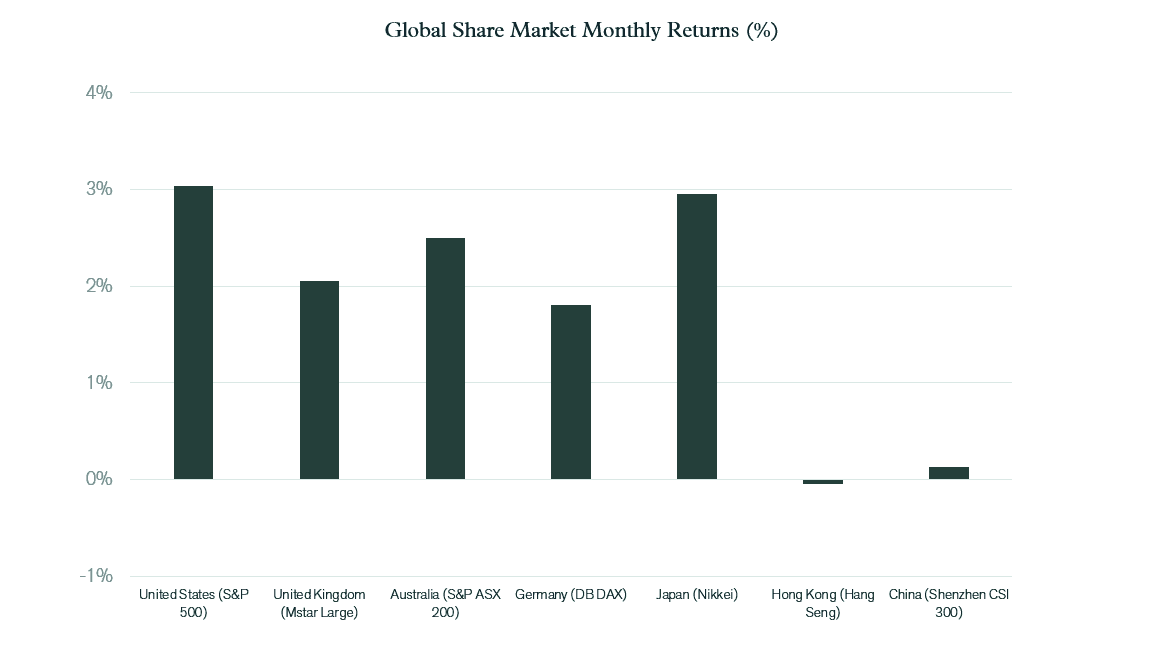 The United States once again led the global equity market higher, with the S&P 500 Index pushing through new record highs with a 3.0% gain. There were similar rates of increase across Europe and the UK, with concerns over higher daily COVID case numbers being tempered by rising rates of full vaccination. By the end of August, the European Union had reached the 70% of adult full vaccination target.

Japan also participated in the equity market gain, with the Nikkei Index advancing 3.0% after a period of relative underperformance in recent months. The share market rally across most developed economies continued despite some signs of moderation in economic growth data. Purchasing Manager Indexes (PMIs), an early economic indicator, were below expectations last month – across both manufacturing and services. Sharemarkets found support from comments made by the US Federal Reserve Chair, Jerome Powell, suggesting any tapering of bond purchases in the near term should not be seen as a sign that interest rates were about to increase.

Signs of weaker economic data were also apparent in China, with manufacturing and retail sales indicators falling short of expectations. As a result, Chinese and Hong Kong equity markets finished the month flat, failing to recover any significant losses of recent months. Investors remain concerned over a step up in regulatory action that has materially impacted the Technology and Education sectors this year. Elsewhere across emerging economies, equity markets performed much better, with South Asia (up 8.1%) and Eastern Europe (up 4.2%) contributing to an overall Emerging Market Index gain for the month of 3.2%.

Profit reporting on the Australian sharemarket wasn’t as strong as the US reporting season, but the results were generally positive, albeit with limited future earnings guidance. The S&P ASX 200 Index rose 2.5% over August, bringing the annual gain to 28.1%. However, there was a high level of disparity in returns across sectors last month, with Technology generating the largest gain of 17.0%. Buy-Now-Pay-Later stock, Afterpay, made a significant contribution to this increase with a jump of 38% following the announcement that US company Square Inc had agreed to purchase all of the issued shares in Afterpay via a scheme of arrangement.

Corporate actions were also significant in the resources sector, with the announcement that BHP’s oil and gas business planned to merge with Woodside. Should the merger proceed, the new expanded Woodside business would be owned 52% by existing Woodside shareholders and 48% by existing BHP shareholders. In addition, BHP announced that they would be cancelling their secondary listing on the London exchange, effectively consolidating this into their Australian listing. Despite these corporate actions, both the resource and energy sectors declined in value over August, with 8.8% and 3.9% respective falls. Weaker iron ore prices, which dropped 23% over the month, impacted heavily on the resource sector.

As was the case in July, the more defensively positioned sectors on the Australian market performed well, with healthcare (up 6.8%), consumer staples (up 6.9%) and property trusts (up 6.3%) all recording significant price gains. The financial sector also attracted substantial support with evidence of higher premium margins across insurance companies boosting the price of QBE (up 9.6%), IAG (up 10.7%) and Suncorp (up 12.3%). 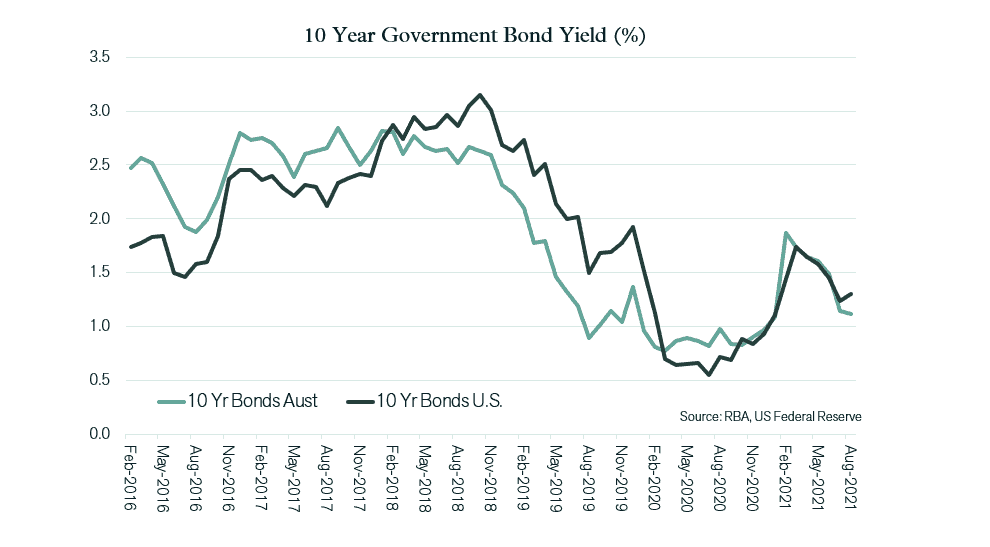 Central banks across the globe have maintained a commitment to low interest rates despite some evidence of higher inflation and improving economic conditions for much of the past year. In Australia, the current lockdowns are likely to have delayed a shift in interest rates. Benign wages growth data for the June quarter would have re-enforced this view, with little evidence that a sharp spike in job vacancies over the period generated any material wages growth or inflation. As a result, Australia’s Wage Price Index rose just 0.4% in the June quarter, creating an annual increase of 1.7%.

Australian bond yields drifted marginally lower over August, with the 10-year government bond yield finishing the month down 0.02% at 1.12%. In contrast, yields in the United States bounced off recent lows, with the 10-year Treasury yield rising from 1.24% to 1.30%. The widening in the gap between Australian and US yields is likely to have contributed to the continued decline in the $A, which fell US 0.5 cents over the month to US 73.4 cents. The large decline in iron ore prices for the second consecutive month, is also likely to have had a negative impact on the $A. The AUD has now fallen US 4.9 cents over the past 6 months.

Over much of calendar 2021, bond markets and equity markets have been playing to a different tune, with bond yields falling from a February peak and equity markets continuing to advance at a steady pace. Bond markets appeared to be more attuned to the prospect that the economic recovery and associated inflationary spike would moderate; whereas equity markets found enough promise in rising earnings to push valuations to new record highs. The economic data released over recent weeks has tended to vindicate the bond market view, with clear signs that the recovery cycle is maturing. Whether this also means that the inflation uplift will be temporary remains uncertain. The prospect of a weakening economic cycle combined with inflation persistency could be challenging for both bond and equity markets in the months ahead.

In light of the moderation of economic growth data, the reorientation of equity market focus towards more defensive stocks and sectors over the past quarter appears logical. In the initial period following the onset of the COVID crisis in February 2020, falling interest rates triggered a strong rally in “growth” styled equities. The Technology sector was at the heart of this price surge and also benefited from the structural business changes associated with lockdowns. Then, on the news of vaccines in November, the pattern of market growth switched to “cyclical value” stocks positioned to benefit from reopening and an improving economic outlook. Banks and resources performed particularly well through this period. However, through these 2 phases of market growth, the more defensively positioned equities were left behind somewhat – until the last few months when sectors such as property trusts, healthcare and consumer staples have risen materially.

In an environment where interest rates have no further to fall and the economic growth trajectory has peaked, the completion of the third phase of the post COVID equity market adjustment, as described above, is likely to leave very few growth assets undervalued or attractively priced. Infrastructure, potentially positioned to benefit from increased inflation-linked cash flows, still appears cheap relative to other growth assets. In addition, emerging market equity valuations have not kept pace with developed markets, possibly due to the additional uncertainties and risks of the COVID crisis, as well as the more significant challenges associated with executing stimulatory economic policy in emerging economies. However, whilst emerging market equity valuations may be attractive on a relative basis, recent developments in China present a concern. They should be considered closely in any emerging market investment decision.

In the press: AFR - Rich variety of bonds lighting up innovative pathways

Read this before you start investing in a fixed interest ETF