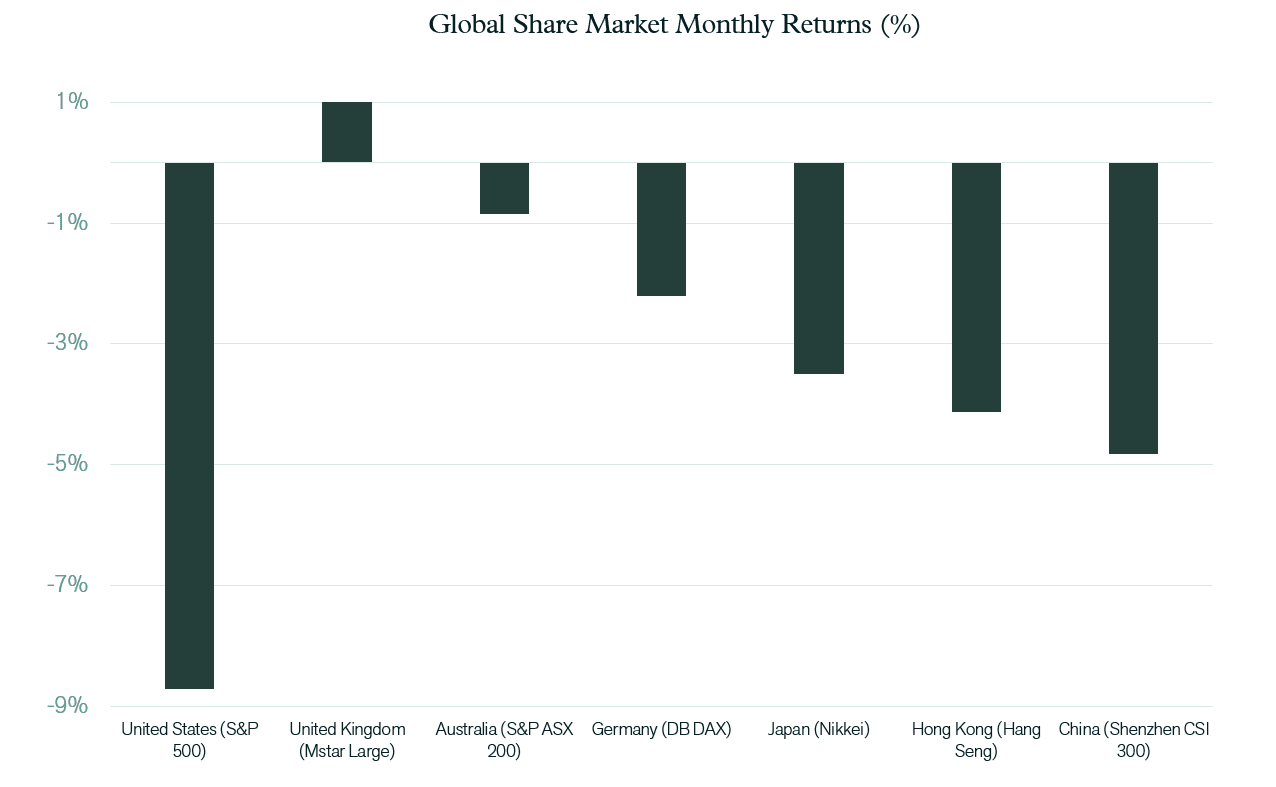 Global share markets responded negatively to further interest rate increases over April. As was the case earlier in 2022, higher interest rates disproportionally impacted “growth” orientated equities. Those companies reliant on earnings growth in future years (rather than current earnings) typically have their valuations more heavily influenced when interest rates rise. Inflation combined with some lower than expected profit results from growth companies (e.g. Netflix) last month created a significant fall in “growth” styled equities. With the United States having considerable exposure to growth sectors, such as Information Technology, the US underperformed the broader global average, with the S&P 500 Index dropping 8.5%. Losses in other developed markets were less significant. The UK once again moved against the trend, rising by 1.0% as it continued to benefit from increased oil and energy prices.

Global infrastructure and property sectors again performed better than equities overall. With cashflows in these sectors often closely linked to inflation, support for property and infrastructure assets has been relatively strong over recent months. 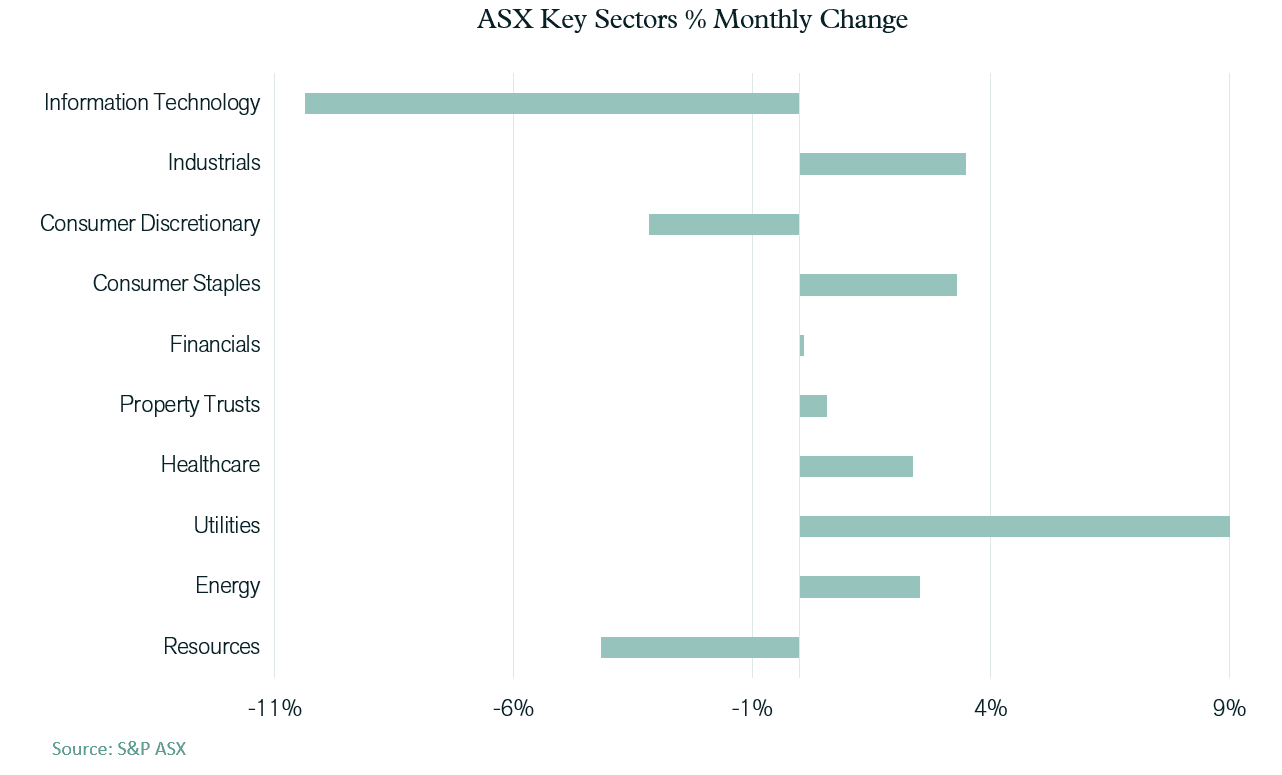 Losses on the Australian equity market were less than the global average last month, as has been the pattern for most of the past quarter. The ASX200 index outperformed global equities by 15.6% in the 3 months to April. Relatively low exposure to “growth” styled equities and high exposure to resources & energy are two key contributors to this outperformance.

Australian energy stocks continued to advance last month, supported by a further 4.4% increase in the global oil price. However, there was some reversal of the recent appreciation in resource stocks, with the sector falling in value by 4.2% over April. This weakening was at least partially attributable to a 7.2% fall in the iron ore price, which is likely to have been impacted by the uncertainty over the Chinese growth outlook. As was the case globally, Information Technology stocks recorded a large decline, with the sector falling by 10.4%. Losses in the sector over the past year are now 22%.

More defensively positioned sectors increased in value over April. Utilities were the strongest, rising by 9.3%. A 12.4% jump in AGL’s share price made a significant contribution to the Utility sector’s performance. AGL is currently proposing a demerger of its energy retailing and electricity generation businesses, while the ongoing prospect of a takeover of the company could also be providing share price support. Outside of utilities, other defensive sectors such as Consumer Staples, Property Trusts, and Healthcare posted positive returns. 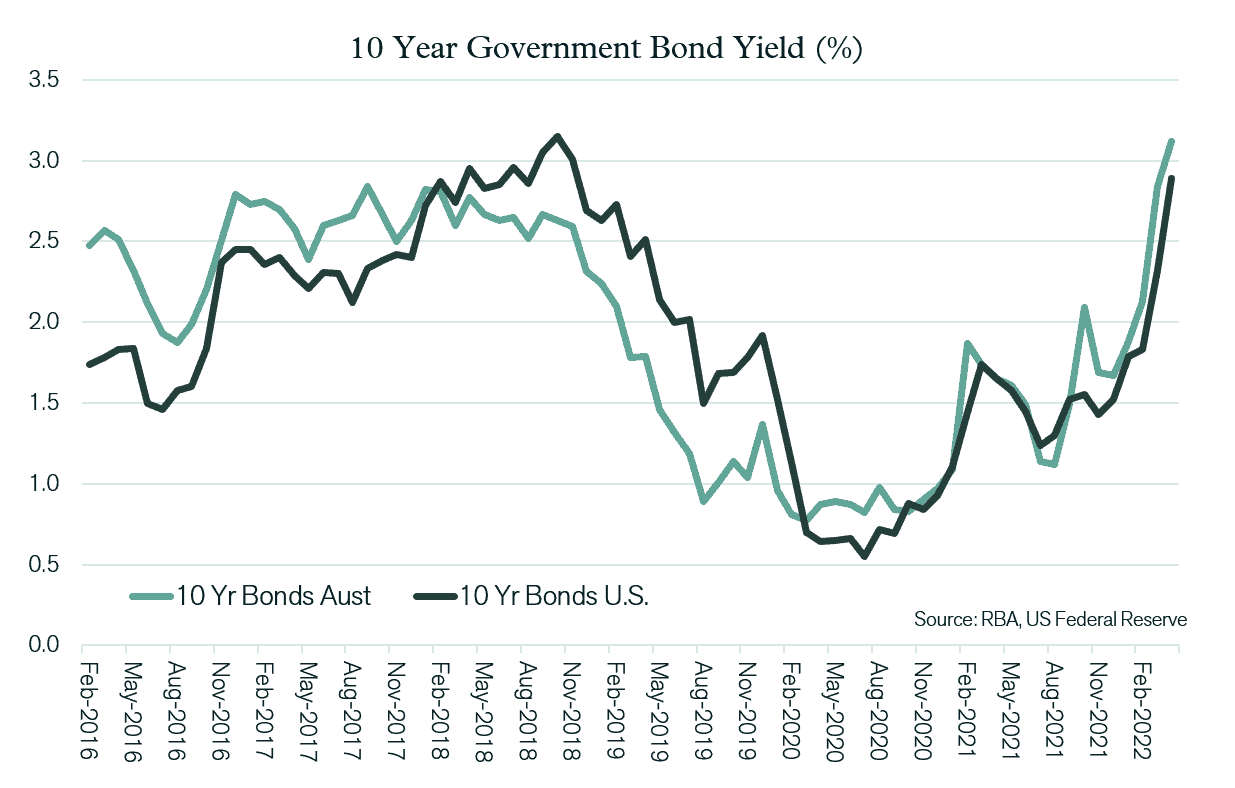 The pattern of higher inflation leading to higher interest rates continued over April. In Australia, evidence of the uplift in inflation was provided in the release of the March quarter Consumer Price Index data, which showed the latest inflation rate to be 5.1%. This was followed by the decision of the Reserve Bank to lift the cash interest rate from 0.1% to 0.35%, which is consistent with the recent trend set by central banks across the globe. With inflation continuing to exceed expectations, bond yields have moved steadily higher. Last month, US 10-year Treasury Bond yields jumped from 2.32% to 2.89%. Despite having lower cash and shorter-term yields than the US, Australian longer-term interest rates remained above US equivalents, with the Australian 10-year government bond yield rising from 2.84% to 3.12% over April. As has been the case over each of the first 4 months of 2022, rising bond yields led to negative returns for fixed interest investors. 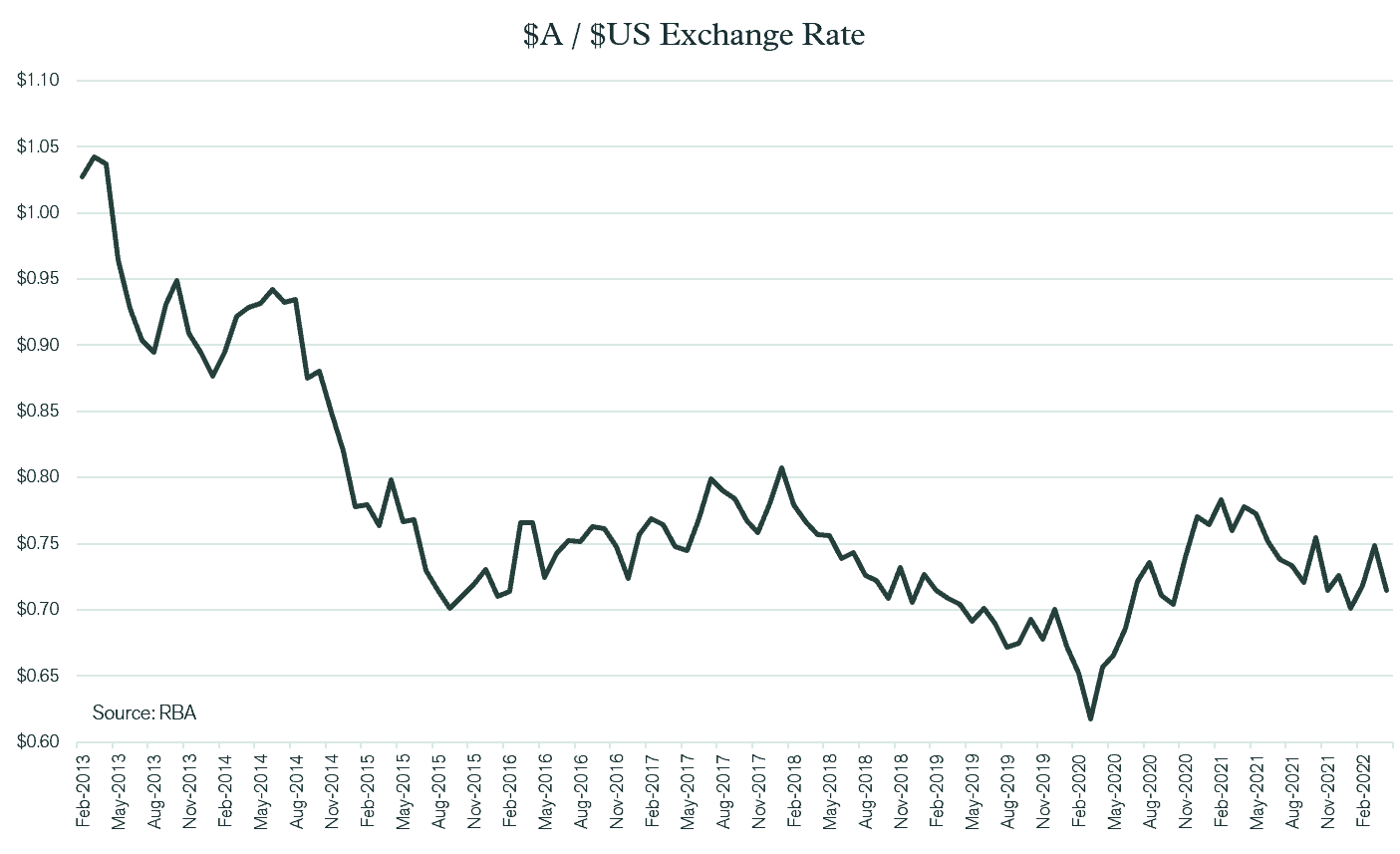 With the further increase in US interest rates, there was strong support for the $ US last month. As a result, the $A declined from US 74.8 cents to US 71.5 cents. This deprecation helped soften the impact of falling US equity valuations for Australian investors with unhedged exposures. The $A was, however, stronger against both the Euro (up 1.2%) and the Japanese Yen (up 1.9%) over April.

The magnitude of the change in bond yields over recent months appears to have moved beyond market consensus on the likely path of cash interest rate movements. Bond yields are higher than is implied by most economist forecasts of future cash rates. The relatively sudden removal of central bank bond buying (through their quantitative easing programs) may have led to a shortfall in bond demand, thereby creating a price fall (yield increase) beyond the fundamental or logical valuation. If this is the case, then a premium is currently available in bond yields, which should ultimately be rewarding for investors.

What does this mean for fixed interest investors? Opportunities to take on more duration (interest rate term) exposure in fixed interest portfolios should now be considered. The short to medium term section of the yield curve appears particularly attractive (3-year government bonds in Australia are now yielding 3.0%), with yields above the most reasonable estimates of inflation averages for the equivalent period. Investing to take advantage of this duration premium appears to be a more robust strategy than holding large amounts of cash or taking on too much credit exposure at this time.

Whilst the rise in interest rates may have provided more conviction around the most appropriate approach to fixed interest, the outlook for equities is less clear. Rising interest rates have definitely been a major factor behind the weakness in equity markets this calendar year. However, if bond yields have “overshot” fundamentals (as implied above), then perhaps the risks to equities from this point forward should be considered lower as further increases in bond yield become less likely.

There are, however, other contributors to equity market risk outside of the interest rate factor. Although the economic backdrop remains reasonable with solid employment and household spending prevailing, profit margins have come under increasing pressure in recent months as input costs, particularly labour, are forced higher. Not all companies can pass on higher costs in full, and previously expected earnings growth forecasts could be challenged.

Notwithstanding the increase in risks associated with company earnings, equity prices have already materially declined over recent months, reducing the potential for further decline. Global equity valuations are now 12.1% below the level recorded at the close of 2021. Far more significant declines have been recorded in Asian equities, global smaller companies and sectors such as Information Technology, which may now be offering compelling value when compared with the broader global equity asset class.

If you have any questions or want to discuss your investment strategy then please book at chat with me.

Strategies ahead of the end of the financial year

Superannuation changes from 1 July 2022 that you need to know